The History of the Watch Hill Flying Horse Carousel

When approaching Watch Hill Beach, you might first be drawn to the water, as the area looks out over the Atlantic Ocean and provides outstanding scenery in the summer.

You could also be lured by the sand, which is soft, abundant, and inviting for any beach-lover who happens upon it.

Once you get to Watch Hill Beach, however, you’ll quickly realize that this is more than a beach, as it is home to a living piece of American history. This historic venue attracts a crowd every day during the summer, with children lining up all the way down Bay Street for their chance to get up close. 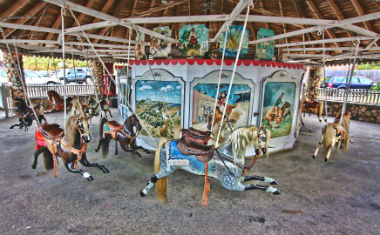 The first time you see the crowds, you’d be excused if you believed a celebrity was making an appearance or a whale was approaching the shore, drawing the attention of so many people, but the attraction is much more permanent than that.

You see, this is where the Watch Hill Flying Horse Carousel lives, and we guarantee that you’ve never seen anything like this before because, quite frankly, nothing like this exists anywhere else in the country.

If you’re looking at real estate in Watch Hill, Rhode Island, you’ll quickly learn about the region’s history because it is often a selling point and the Watch Hill Flying Horse Carousel is a big part of this feature.

What is now the historic Watch Hill Flying Horse Carousel goes back to a time before it ever appeared in Westerly, as it is thought to have been originally built in 1867 by Andrew Christian and Charles Dare Company, a group based out of New York City. The design of the carousel is unique, as all of the horses are suspended on chains, rather than poles like most versions of this carnival ride. In fact, the unit is the only remaining carousel that uses chains in the entire country.

The outside horses have something a little unique involved, as there is a series of brass rings surrounding the carousel. If the rider can grab one of these rings, he or she gets to ride again for free. Keep in mind that you must be under five-feet tall and 100 pounds to ride, making this feat far more difficult than it might originally seem.

Since the horses are on chains, the carousel makes it feel as though the riders are flying. Although carnivals rides have become far more complicated in the last century and a half, young riders are sure to enjoy the sensation of flying on their very own horse.

The carousel’s history in Watch Hill dates back to 1883. That summer, a traveling circus came through the area, bringing a carousel, among other items, to entertain local children. When the show left town, however, they took everything with them, except for this carousel.

No one knows why the carousel was left behind, although the prevalent theory is that maintaining these devices was expensive and perhaps the circus could no longer afford to pay for its constant repairs.

Whatever the reason for leaving it behind, the people of Watch Hill embraced the carousel, making it their own. In fact, the ride has been in operation since the summer of 1883, making it the oldest continually-running carousel in the United States.

The carousel has evolved considerably since its early days. At first, two men had to power the unit with cranks physically. Later, a horse was tied to a center pole with a rope, which would unwind as the horse walked. In 1897, the carousel became water-powered, and it wasn't until 1914 that electricity was first used to operate the ride.

Things haven't always been rosy for the historic carousel, as in 1938, a hurricane ripped through the area, extensively damaging it. Horses were found buried in the sand dunes around the region, and three chariots that were part of the original ride were never found and have yet to be replaced.

By 1948, the antique wooden horses that make up the ride were in horrible shape, so Harriet Moore, a local woman, started a preservation project and partnered with the Watch Hill Fire District. In doing so, she ensured the Watch Hill Carousel would remain in tip-top shape for generations to come.

A new roof was built for the carousel in 1948, and various aspects were strengthened over the years. In 1993, a local artist by the name of Gary L. Anderson was hired to refurbish the aging horses, making them look as good as new.

The history of the carousel that is so important to locals is not lost on government organizations either, as it is now listed on the National Register of Historic Places. It was also made a National Historic Landmark in 1987, ensuring it is protected for generations to come.

Today, the carousel runs from Memorial Day long weekend through Labor Day each and every year. In late May through the middle of June, it is only open on weekends, but once the kids are out of school for the summer, it runs daily from early in the morning until late at night.

The Watch Hill Memorial Library and Improvement Society maintains the ride, ensuring it is always in great shape and ready for a summer of actions.

To make things even better, it only costs $1 to ride on the inside horses or $1.50 on the outside, allowing your kids to experience a piece of living history for a nominal fee.

Heading to Watch Hill to ride the Flying Horses Carousel has become a tradition for families who live in South County towns like Westerly, Charlestown, and Kingstown, in addition to those just visiting for the summer. After buying your home in Watch Hill, you're sure to have a new summer tradition, as well, since there's honestly no way you'll get through the summer without visiting the Flying Carousel with your family at least once.