Hopkinton, Rhode Island – One of the state's most historic locations

There's a rich history in Hopkinton, Rhode Island, as the area has been inhabited for over 2,000 years and was settled by Europeans starting in 1669.

The area has long been an important strategic location for the people who live here because Wood River and the Pawcatuck River run through the community, making it accessible before roads were built.

Today, Hopkinton has about 8,100 residents and plenty of wide-open spaces to explore once you buy a home there.

If you're looking for a great mix of nature and history, while still being only 45 minutes from Providence and an hour from Hartford, Hopkinton is worth considering as your new home.

Hopkinton has four major villages that contain much of the town's population. In addition, Ashaway and Hope Valley are home to the majority of the town's commercial properties, so they're where residents spend much of their time.

The village of Ashaway sits right on the Connecticut/Rhode Island border and has a downtown area featuring a library, some shops and restaurants, and a few other businesses. There are residential sections of this village, too, giving it a suburban feel.

The largest village in Hopkinton is Hope Valley, a community of over 1,600 people that sits right next to the town of Richmond. Hope Valley is a commercial center in Hopkinton, as there are plenty of businesses along Main Street, and the outskirts of the village feature numerous residential sections.

Rockville is the far northern village in Hopkinton, and it is mostly residential properties and farmland. There are some nature preserves and camping areas there, as well as waterfront homes on Wincheck Pond.

Bradford is in both Westerly and Hopkinton and has a mix of residential, commercial, and industrial properties. The village has nearly 1,500 people, but many of them technically live in Westerly.

While not considered one of the town's major villages, Hopkinton City features the town hall and historic district, which make it notable. The I-95 runs right through Hopkinton City, as all, making it easy to reach from other areas.

In addition to the main villages, Hopkinton has some other communities to examine.

On the northern end of town near Rockville, there's Centerville and Moscow, both of which are residential areas that are close to numerous ponds, some wooded areas, and multiple campgrounds.

The central section of Hopkinton has the communities of Canonchet and Woodville, which feature farmland, golf courses, and the Black Farm State Management Area. The I-95 runs through this region, as well, making it easily accessible.

In the southern part of Hopkinton, RI, you'll find Burdickville, South Hopkinton, and Kierieian. These communities provide a mix of farms, rural properties, residential neighborhoods, and wooded areas while being relatively close to the bustling Ashaway village.

The history of Hopkinton, Rhode Island

Hopkinton, Rhode Island, was originally part of Westerly, which was incorporated in 1669. Later, in 1757, the towns separated with Hopkinton taking its name from Stephen Hopkins, who was the Governor of the Colony of Rhode Island and Providence Plantations at the time and whose name is on the Declaration of Independence.

The names of the various villages throughout Hopkinton come from the mills that made up the town's industrial areas. These mills needed riverfront locations, so many communities in Hopkinton sit on the two major rivers that run through town.

Things to do in Hopkinton

You'll never run out of historic locations to visit in Hopkinton, as the town has a notable past. For starters, there are historical districts found in Hope Valley, Hopkinton, and Bradford, along with Wyoming, a village that is mostly in Richmond but has a small section in Hopkinton.

There's also the Upper Rockville Mill and Black Farm, which were important industrial and agricultural sites in the town's early days.

Or, for some prehistoric history, you can check out the Tomaquag Rock Shelters, which date back as far as 800 BC.

If you're looking to check out some local restaurants or shop at the boutiques, Hope Valley and Ashaway have you covered, and there is a high density of antique shops in these villages, too.

For a weekend in the wilderness, there's camping at Wincheck Pond and Whispering Pines and exceptional fishing areas at Long Pond and Ashville Pond.

Eli Pond, the Rockville Management Area, and the Canonchet Preserves have lovely networks of trails to explore, and each has a parking area that makes the trails easy to access.

When you live in Hopkinton, you're never more than a few minutes from an exciting outdoor area to explore.

Buying a Home in Hopkinton, RI

Purchasing a house in Hopkinton, Rhode Island, is like stepping back in time, while still having access to all of the amenities that you require. The town is old, and retains a lot of its historic charm, but is close to modern facilities in other parts of Washington County, along with the cities both east and west of it.

If you are considering buying a property in Hopkinton, let Randall Realtors show you the way. Contact us with any questions you might have about living in this quintessential Rhode Island town.

Homes For Sale In Hopkinton 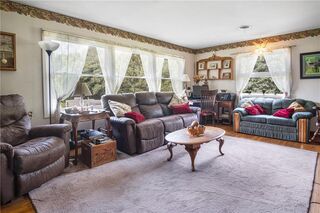